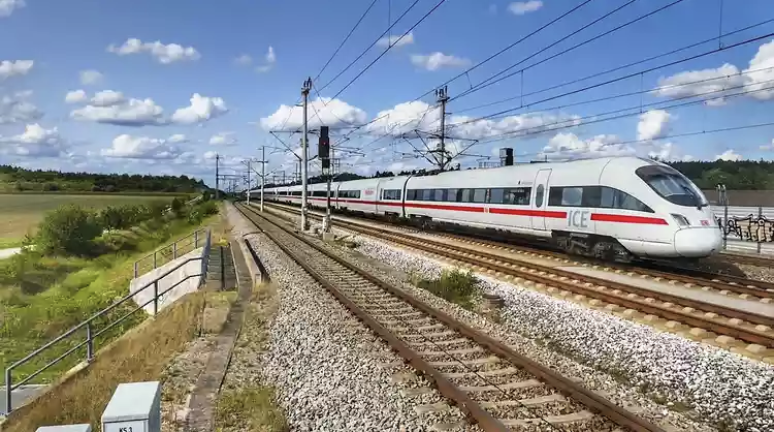 Ease of travel is a brilliant argument to explore Germany by train. Public transport is generally quite well developed in Germany, making it possible to reach tourist destinations without having to cope with the challenges of German roads – and while the lack of speed limits of the Autobahn might be tempting, it is generally overrated. Roadworks, local speed limits and queues limit the joy quite a lot, and being tailgated by an angry BMW driver for not going faster than 160 km/h is also not as much fun as it sounds.

The rush of traveling at high speed is not confined to the motorways, though. Since the introduction of the InterCity Express ICE, speeds of up to 300 km/h between Berlin, Hamburg, Frankfurt, Munich or Cologne are no problem any more. That is nearly 190 mp/h, and it comes with free Wifi, air conditioning and comfortable seats. The ICE is the premium offer, though, and comes at a price. Choosing slower trains will not only be cheaper, but also closer to an authentic railway experience. Watching the world pass by outside of the window, taking in the changing scenery, is on the top of the list of benefits named by train travelers, right next to the ability to read, work or make new friends.

When it comes to the latter, Friday and Sunday are by far the best days to travel, besides peak times in the morning and evening. German trains are notoriously crowded on these days, and while the lack of space usually doesn’t reach Japanese standards (where attendants sometimes push passengers into the train so the doors are able to close), there’s hardly a chance to sit, unless you have a seat reservation. Since that is just a small price of 4,90€ and included in most First Class tickets anyway, it’s a good option – however, it is only valid for 15 minutes after leaving the station, so better not to linger.

The best travel day for convenience and comfort is Tuesday, and if you prefer quiet travel, the “Ruhebereich” should be just for you. In ICE and many other long distance trains, there are dedicated zones of silence, where phone calls, loud conversations or music are not permitted. In these trains you will usually also find electricity outlets – a blessing for business people and gadget-addicted nerds, but even more so for tourists on the road.

The key to enjoyable travels with Deutsche Bahn, the German national railroad operator, is planning. Train travel in general is rather expensive and return tickets are, unlike in the UK, actually double the price, not just a small add-on to the original amount. But like in the UK, booking ahead makes tickets cheaper, and if you are able to sacrifice on flexibility, you can save even more. Sparpreis, Super Sparpreis, Flexpreis, regional tickets, day tickets help to reduce travel costs, yet there are such a jungle of different options that it can be difficult to navigate. Deutsche Bahn offers an own search function to make finding the best option easier – and also offers an overview of the best options in English:

Even better news for travellers used to thetrainline.com: The website also is available in Germany. One option you might come across while researching is the BahnCard, a subscription service that reduces the costs of train travel by up to 50%. Since the card itself isn’t very cheap, it’s probably rather an option for frequent travellers than for tourists.

So where to start exploring Germany by train? You could have a look at the most beautiful German train stations first. Berlin, for example, has multiple stations with long and exciting history, due to the city’s rich history not only as capital, but also as the location of the Berlin Wall during the Cold War. Hamburg’s station was opened by Emperor William II and comes with a great view. Entering Cologne on train means crossing the river Rhine on a majestic iron bridge, the station is right next to the iconic cathedral. The oldest still active German train station can be seen in Vienenburg in Goslar, opened in the year 1841, just six years after the first German railway station in Fürth and 11 years after the very first station on the globe in Manchester, today the Museum of Science and Industry.

Deutsche Bahn offers an own website for explorers at https://entdecke-deutschland-bahn.de/. It is sadly German only, but not all too complex to understand, and it gives an idea of just how beautiful some of the railways in Germany are. One of the most impressive routes follows the Rhine Valley, meandering along the river, passing by castles and picturesque towns, crossing through plenty of tunnels.

As pretty as it is, the Rhine Valley is also an eye of the needle, emphasisizing one of the major problems of German rail travel: Logistics and Passenger trains share the same tracks on a network that’s already beyond capacity. Late trains are a rather common occurrence with German trains, and catching connecting trains can be a challenge. At times not more than 77% of trains make it to arrive within ten minutes of their scheduled time, which does not quite correlate with stereotypes about German punctuality.

In fact, you will hear Germans complain about Deutsche Bahn all the time. When I started to research this article, I interviewed plenty of my German friends about their experiences, and the criticism was harsh: Too crowded, too slow, too dirty, too expensive, not flexible enough. Yet all this has to be taken with a grain of salt, because: Germany is a country of automobilists. Many see using a train as an ecologically sound, reasonable thing to do, but not a nice thing to experience – although nearly everyone among my interviewees mentioned that a train ride is a sure way to get children excited: “We all remember pushing our noses against the window, watching the world pass by”.

“Being on a train gives me time to think, read, work and relax. You don’t have that in endless queues on the Autobahn”, one of my friends stated. “Public transport within cities is brilliant”, another one added. “Buses, trains, metro, underground are good in most big cities, and with a season’s ticket, it’s also not that expensive. Oh, and students usually get it for free.”

German railways are famous for not accepting credit cards or even debit cards – they are focused on the excusively German system of “EC cards” for any payment that is not cash. Arriving on an airport in the country, you can watch desperate international travellers trying to cope with their lack of Euro notes to pay for their connecting trains. You can also not pay straight to the conductor on the train. Entering a train without a valid ticket turns you into a fare dodger. So take care to stay legal.

Railway history: A mirror of German past and present

When Germany built its first railways, it was still a rag rug of tiny states with only a handful of bigger players; a huge obstacle for the development of a proper railway system, at least until the military started to grasp the value of a functioning train network. The German railway companies were not merged into a nationalised venture until 1920, when the Deutsche Reichsbahn was founded.

The history of this state-run railway is blemished by the role it played in Hitler’s war and the deportation of Holocaust victims throughout Nazi times. Towards the end of the war, it was one of the major targets for allied attacks, leaving it in ruins. The rebuilding after the war was so expensive that the newly founded Deutsche Bundesbahn never became profitable.

In 1993, the national railways of East Germany (Deutsche Reichsbahn) and West Germany (Deutsche Bundesbahn) merged into one organisation, the newly founded “Deutsche Bahn AG”, a privately organised stock corporation. Although 100 per cent of the stocks remained in the ownership of the federal government, this meant huge changes for the employees of both Reichsbahn and Bundesbahn.

The German constitution demands that the public railways have to remain in state ownership, making a sell-off like in the UK impossible. Yet the status of Bahn staff changed from public servants (who enjoy many special benefits in German law) to simple employees. This meant privileges were reduced, but also meant that for the first time they were allowed to actually strike – public servants in Germany do not have this right. The “Bahnstreik” finally became a possibility, and also a necessity, as the newly founded Deutsche Bahn AG aimed to privatize its operations further and go public on the stock market. The search for “efficiencies” and savings, a new cash flow management and constant profitability assessments started massive streamlining of the German railway system, with unprofitable routes being closed and railway stations being transformed into “event experiences” with shopping malls that resemble airports.

The restructuring went on until 2008, when the financial crisis put a stop to it. Today, Deutsche Bahn is the biggest railway company on the planet by revenue – worldwide DB trains and buses carry 4.4 billion passenger every year and a freight volume of 277 million tons of goods, with nearly 300,000 employees. This makes Deutsche Bahn also the second biggest transport company on the planet, right after the German postal and logistics company Deutsche Post/DHL, another state-run corporation that was turned semi-private at the end of the last century.

With climate change looming, the transport business of Deutsche Bahn is expected to grow massively within Germany, but also internationally. Deutsche Bahn is – via its subsidiary Arriva – also one of the biggest players in the English market and runs buses, coaches, trains, trams and waterbuses all over the country. Its most famous train is a proper national treasure: The British Royal Train.