How the New German Wave made steel sheets fly 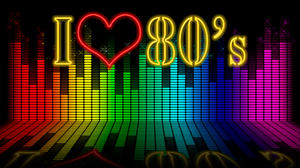 Nosediving vultures, astronauts lost in space, red balloons chased by fighter jets, dancing dairymaids and golden horsemen… this colourful pandemonium defined the beginning of the 1980s in Germany’s music world. The New German Wave (Neue Deutsche Welle) was frankly odd. Weirdness was the main character trait of the music I grew up with in my early years.

The NDW was a West German phenomenon, although it had a huge footing in West Berlin, back then not the capital of the whole country, but surely the capital of quirkiness and alternative lifestyles. The other leg of the madness was rooted in Hamburg, a city that despite its reputation as Nordic, cool and very posh also is home to plenty of fringe and underground culture.

This article will feature a ridiculous amount of YouTube links, because writing about music is one thing, but being able to listen yet a totally different experience. Emphasis shall be on the word “experience”. If you never listened to it, you might need to give these sounds of a different century a proper chance to reach your ears.

So what is it all about? London music venture TheVinylFactory claims that NDW was “a fertile and energetic incarnation of British punk and new wave, re-imagined in the squatted houses of St Pauli on cut price synths and shoddy mics, the German language lending a Teutonic darkness to the sound.” – Poetic, but also a bit anglo-centric. The name of the genre seems to pay a tribute to the British “New Wave”, but also has a more German centered meaning: “Deutsche Welle” is the name of the German international broadcaster that, like the BBC for Britain, is the voice of Germany in the world.

The Neue Deutsche Welle never made it far outside its homecountry, with a few very notable exceptions. Pop singer Nena stormed the American charts with her song “99 Red Balloons” – a one hit wonder on the international market, but a constant in Germany, with appearances in movies and many successful hits and a proper comeback in the early 2000s. In the UK, Nena became most famous after she toured the country 1984 for her unshaved armpits. If you want to check this out – or better: Listen to her music – here is a live version of her song “Nur geträumt”

Sorry, this video isn’t available anymore! It must have been deleted. 🙁

Different from many other NDW artists, Nena’s music worked very well in live settings. It was less electronic, less artificial, less cool than many of the famous projects of the time. Peter Schilling, for example, who’s song “Major Tom” made it to the charts in North America as well and who even got noticed by his big idol David Bowie, had to work much harder on stage. Here is Major Tom in the English version.

Peter Schilling’s electro pop worked great with nerds and science fiction fans. Many of his songs followed this trend – “Die Wüste lebt” (The desert is alive) described the end of mankind, for example.

The artist himself appeared very humble at the time – no scandals, no wild parties, no VIP chat. For juicy news of that kind, fans had to turn to Austrian popstar Falco. The epitome of flamboyance, sprinkled with a hefty bit of arrogance, Falco stormed charts and took over big parts of the NDW audience. While “Der Kommissar” (The Inspector) was merely a German/Austrian success, his single “Rock me Amadeus” made it across the pond. “Vienna Calling” followed quickly after. Here is his fabulous ode to decadence.

Falco’s lifestyle matched his appearance and behaviour. In 1998 he died in a motorbike crash in his home in the Dominican Republic – not famous enough for a real conspiracy theory hype, there were still rumours that he is still alive and used the accident to boost his last album “Out of the Dark”. The idea that he would work so hard to get out of the limelight seems outlandish, given his near-narcissist personality… but of course it is well possible that the stage persona Falco was different from the real Hans Hölzel behind the scenes.

Authenticity was hard to judge with many singers and bands of the New German Wave. Quirky and strange, breaking boundaries in rather square West German society was part of the charme. Then again, what started as a provocative underground movement first quickly turned into a highly commercialized mainstream business. Not surprising, many artists quickly distanced themselves from the classification as “Neue Deutsche Welle”, resisting to be taken in by the marketing machinery of big music labels.

The band “Einstürzende Neubauten” (Collapsing New Builds) for example did absolutely oppose the idea of being NDW. Famously using custom made instruments made of scrap metal and building tools, they left a mark in 1980’s Madchester when they put their instruments to the pillars of the legendary Hacienda Nightclub in Whitworth Street. Although the Hacienda building doesn’t exist anymore today and has been replaced with gentrified luxury flats, it was not the fault of the Einstürzende Neubauten, who didn’t succeed bringing the club down and had some very successful gigs there instead. This video, aptly named “Autobahn”, should give a great idea why the band fit so well into Manchester.

And here we are! We finally touched the German Autobahn, bringing us to one of the biggest hits of NDW times: Markus with his song “Ich will Spaß! Ich geb Gas!” (I want fun! I step on the gas pedal!). Below is the video – and yes, it is really THAT daft. Speeding on the Autobahn, fun by driving fast cars and being a general road pain by pushing and tailgating is all it is. This utter nonsense met the emotions of the many Germans that it was turned into a whole movie, featuring Nena and Markus; the worst possible 90 minutes you could spend in a cinema, ever.

Let’s leave this disaster right away and look at friendlier, if also shallow songs. Here is DÖF and CODO, the little robot who brings love back to Earth.

Silly? Yes! Much of NDW music is cringeworthy, bordering embarassing. Meet Trio, surprisingly a group of three men (who would have thought). Their song “Da Da Da” might be a musical reference to Dadaism and include criticism of modern capitalism and bourgeois values. It might also be just slightly bonkers without deeper meaning.

It speaks for the latter that frontman Stephan Remmlinger moved on to do happy music like the song “Alles hat ein Ende nur die Wurst hat zwei” (everything has an end, only sausage has two), a track that can only be enjoyed after huge amounts of alcohol. Drummer Peter Behrens, who joined Trio straight from his former job in a traveling circus, fell into drug addiction, while “Da Da Da” made it to the top of the charts in Canada and Brazil.

Also riding the fun wave and being successful on dancefloors full of drunk party-goers was the band Geier Sturzflug (“Vultures in a nosedive). Their easygoing sounds were contrasted with humourous, but extremely political lyrics, demanding GDP growth by all means, killing Grandpa and a baby in the process, or an invitation to Europe “while it still exists”, featuring a long list of potential tragedies caused by a nuclear holocaust: Bomb carpets over Istanbul’s bazars, a mushroom cloud over Cologne Cathedral, Big Ben in flames.

It is highly unlikely that Alfred Hilsberg, a music journalist for the magazine Sounds, thought of Markus or Geier Sturzflug when he coined the genre term “Neue Deutsche Welle” in the late 70s. His article “Neue Deutsche Welle – Aus grauer Städte Mauern” (German New Wave – From Gray City Walls) described the music scene in Hamburg at the time, and its wild experiments with cheap synthesizers and drum machines against saxophones, guitars and whatever else could be found, including household appliances, like the aforementioned Einstürzende Neubauten.

These influences were still present in the later NDW. Especially the playful experiments with electronical sounds and an outrageous mix of instruments were huge fun. Check out sisters Inga and Annette Humpe, who started together in a band called Neonbabies, then split up to work in different projects. Annette stormed to fame with the song “Blaue Augen” (blue eyes): “Da bleib ich kühl, kein Gefühl” (I stay cool, no emotions), she starts, then claiming that blue eyes are the way to wake her up: https://youtu.be/uaEiVAODN-A – Today, she is successful with her band “Ich + Ich” (me + me) , creating warm and emotional pop music, very different from the Neue Deutsche Welle time.

Her sister Inga was part of the project “DÖF” (you met her song “Codo” a little above) and today is part of the band 2raumwohnung (which translates to two bedroom flat), creating modern electronic music that can be quite challenging for the listener.

Synthesizers and weird experiments were characteristics of two other big names of the NDW: Hubert Kah and Joachim Witt. While Hubert was famous for his shrill outfits and extroverted appearance, Witt was cultivating a cool, mechanic style. Both of them made it into careers that outlasted the NDW hype, although Witt to the day complains that the shadow of these times has never left him. He might be right, although looking at his newer songs, he definitely switched from NDW to NDH – the “Neue Deutsche Härte” (New German Hardness) is home to bands like Rammstein or Laibach and represents a very different niche of the market.

Compare for yourself: Joachim Witt 1982 with “Goldener Reiter” (the golden horseman) vs Witt 2018 with “Die Flut” (The Flood):

By no means can we leave you without mentioning an example of Hubert Kah: Sternenhimmel (starry sky). If you like long legs, you are in the right spot.

There is indeed no chance to mention every NDW artist in this article, and I am aware that music enthusiasts might find this text falling short of important information. There is one thing, however, that has to be mentioned: The Neue Deutsche Welle was highly creative, colourful, weird and quirky, and it paved the way for many other German artists and modern German music altogether. The German music scene would be very different without this era.

It has nothing to do with the “Neue Deutsche Welle” of pseudo gangsta rappers of the “Aggro Berlin” label, who in the late 90s claimed the term for their own brand of German hip hop. If you want to dive deeper into NDW music, it’s best to avoid these shallow depths. Looking for something proper “gangster”, enjoy this classic by “Extrabreit”: Hurrah, Hurrah, die Schule brennt! (Hurrah, Hurrah, the school is on fire!) – the perfect ending for an article like this.